Cuzco is a land of many fruits.  Not only does one find those that came with the Spanish and modernity, oranges, limes, apples and kiwi fruit, one also finds many that originated here and have delighted its people for thousands of years.  Of these, none is more delightful than the granadilla, a fruit for which there is still no English.  Granadilla is a climbing vine and evolved in South America.  It grows in the warmer lands of the coast and valleys, as well as the upper jungle.  In Cuzco it is produced in what is called the ceja alta, the eyebrow where the highlands meet the jungle, such as in the area of Quillabamba or Echarate.

The fruit can be either yellow in color of orange, depending on where it comes from.  When broken open it has white flesh and a mass of gray seeds in a pulp.  Sometimes the seeds are dark gray or even black.  Nevertheless, it is the pulp that people find delicious and consume avidly.  The pulp inside the granadilla is sweet, and that is its biggest difference from the tintin and other passion fruits, due to the high content of sugars.  It does not give much juice so, unlike the passion fruit or maracuyá, it is not used to make juice but is mostly consumed fresh.  It is also beautifully perfumed.  While people do make some drinks from it, the granadilla is mostly the raw material for marmalade, jams, and concentrates.

Children particularly love the granadilla.  Parents will send the fruit with them to school in their lunch box so the kids can enjoy them during their breaks in schools and kindergartens throughout the city.  They are also much appreciated at home.  In the high times of rain you can find them in the markets of Cuzco.  In the months of January, February, and March they will be especially abundant. 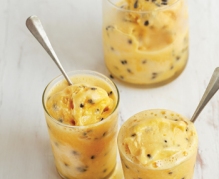 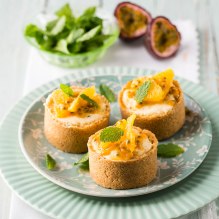