The tamale is recorded as early as 5000 BC, possibly 7000 BC in Pre-Columbian history. Initially, women were taken along in battle as army cooks to make the masa for the tortillas and the meats, stews, drinks, etc.  As the warring tribes of the Aztec, Mayan and Incan cultures grew, the demand of readying the nixtamal (corn) itself became so overwhelming a process, a need arose to have a more portable sustaining foodstuff.  This requirement demanded the creativity of the women…hence the tamale was born.

The tamales could be made ahead and packed, to be warmed when needed.  They were steamed, grilled on the comal (grill) over the fire, or put directly on top of the coals to warm, or they were eaten cold.  There is no record of which culture actually created the tamale but believe that one started and the others soon followed. 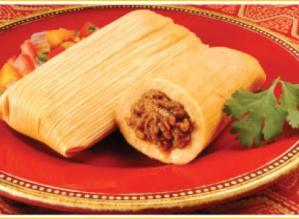