“Hey, Fruit Smack!” Doesn’t quite have the same ring as, “Hey, Kool-Aid!” But that was actually the original name of this popular beverage.  This internationally known soft drink mix, now owned by Kraft Foods, actually started out as a liquid concentrate called Fruit Smack, invented by Edwin Perkins.

Fruit Smack came in six delicious flavors; cherry, grape, lemon, orange, root beer, and raspberry.  Perkins swapped out lemon for lemon-lime and strawberry replaced root beer for the powdered Kool-Ade.  The four-ounce bottle made enough for a family to enjoy at an affordable price.  However, shipping the bottles proved to be costly and breakage was also a problem.  In 1927, Perkins developed a method of removing the liquid from Fruit Smack so the remaining powder could be re-packaged in envelopes (which Perkins designed and printed) under a new name to be called Kool-Ade. (He later changed the spelling to Kool-Aid- trademarked in 1934.)

The packets sold for just 10 cents each and by 1929 the mix was distributed across the country.  By 1950 he was selling a million packets of Kool-Aid each day! In 1953, his little project that started out of his parent’s home was sold to General Foods. Kool-Aid is still the pride of Hastings, Nebraska, and the beverage is the official drink of the state.

Do you know how many ice cubes the Kool-Aid man has in his head? That would be three. He’s also 8 foot tall by 5 feet wide and has his own footprints on the Hollywood Walk of Fame in front of the famous Mann’s Chinese Theater.  Before he had arms and legs, the Kool-Aid Man was just a normal perspiring pitcher with a smile drawn on its face, known as Pitcher Man. Pitcher Man existed from 1954 to 1975, when the contemporary Kool-Aid Man took shape. 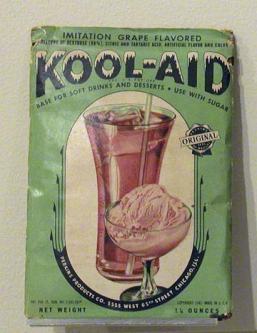