The history of cumin goes back over 5000 years. The ancient Egyptians used it as a spice in foods as well as in the mummification process.  The Greeks and Romans used cumin as a spice and also applied it for medicinal purposes.  Interestingly, it was used to make the complexion paler and cumin was historically used to treat flatulence.  Cumin was also used in combination with other herbs as a poultice for the treatment of stitches and other muscle pains.

Cumin essential oil was used in strong doses as a light sedative for extremely nervous and excited individuals.  In perhaps in a direct contradiction, small diluted doses were used to stimulate individuals impaired by disease.

Originally from Iran and the Mediterranean, cumin is a small seed that comes for the Cuminum cyminum herb, a member of the parsley family.  This seed has a distinct flavor and warm aroma. It is a major ingredient in chili powder as well as curry powder.  It is associated mostly with Indian, Mexican, and Vietnamese foods, but the ancient Greeks kept a dish of it on the dinner table, a practice which continues today in Morocco.

Like many spices, cumin has a rich history and, in fact, according to the Bible, cumin had such a powerful medicinal value that it could be used as money!  In the middle ages, a time when spices were relatively rare, cumin was one of the most common spices.  It was thought to promote love and fidelity.  People carried it to weddings and walked around with it with their pockets.  It was reputed to keep lovers and chickens from wandering.  Thus, married soldiers were sent off to battle with a fresh baked loaf of cumin bread. 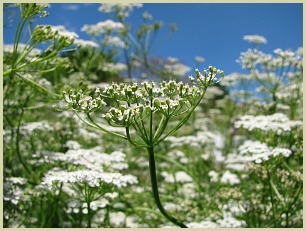 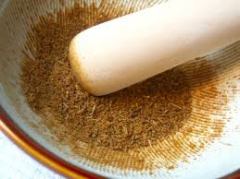