How many licks does it take to get to the centre of the tootsie pop?  Answer at the end of this fact…

Leo Hirshfield was looking around for a name for the new confection he was making from a recipe he’d brought over from Europe in 1896.  He choose the name of his 6 year old daughter, Clara, whose nickname was Tootsie.

Tootsie Rolls were the first penny candy to be individually wrapped in paper.  They were one of the top choices of children who only had a few pennies to spend on satisfying a sweet tooth.

In the 1930s, the first soft-centered lollipops, Tootsie Pops, were sold.  The hard candy on the outside covered the Tootsie Roll center.

During World War II, Tootsie Rolls were favored by soldiers because they could be kept in pockets and barracks bags without melting.  They were also a great source of quick energy.

How many licks to get to the centre of the tootsie pop?  According to a licking machine created at Purdue University…364. 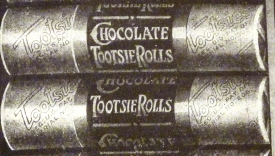