It’s easy to take the spatula for granted.  It sits in the kitchen, unassuming, just another tool amongst the spoons, knives, pots & pans and a wide assortment of varied implements.  Think about it; if there were no spatulas, cooking as we know it would be fundamentally different and many of our favourite dishes may not have existed!

The word spatula, known in English since 1525, is a diminutive form of the Latin term spatha, which means a broad sword (as in spatharius) or a flat piece of wood and is also the origin of the words spade (digging tool) and spathe.

The use of the spatula can be dated back thousands of years ago to as early as the stone ages when man developed tools made with bone and stone for scraping and other activities.  By the Bronze Age, man began making tools out of metal (around 3,300 B.C.).  Evidence has also been found in the archaeological remains in Greece and Rome.

Popular use of the kitchen spatula has also been known since the 1500’s.  Although no single person can be credited with the invention of the spatula, an English-Italian Chef, Zoe M. Martella, patented it. 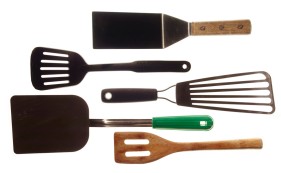