Is there any other word more synonymous with New Orleans than Café Du Monde?

The Original Cafe Du Monde Coffee Stand was established in 1862 in the New Orleans French Market. The Cafe is open 24 hours a day, seven days a week. It closes only on Christmas Day and on the day an occasional Hurricane passes too close to New Orleans…and they serve Beignets!

Europeans have been eating fried dough at least as far back as ancient Rome.  Scriblita were a type of Roman pastry made of moist dough dipped into boiling animal fat.  French cooks eventually developed two basic types of pastry: dough that use yeast as a raising agent, and those that rise with their own steam.  Dough that is moist enough to use steam to fluff up is called choux pastry.

French settlers brought beignets with them as they migrated to the eastern coast of Canada, a region called Acadia, in the 17th century.  Thousands of Acadians endured a forced migration as the British took control of the region a hundred years later. Many Acadians settled in Louisiana, where their descendants became known as Cajuns.  Acadians brought their cuisine, as well as their language, with them as they migrated south.

Beignet is the state doughnut of Louisiana. 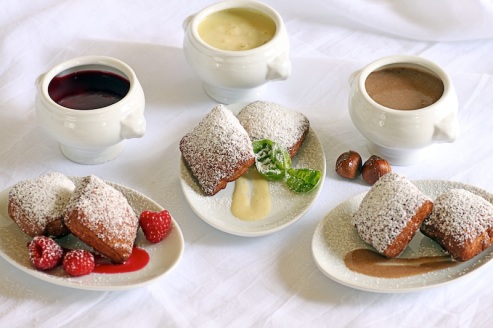