Dandelion greens belong to one of the largest plant families – the Sunflower – which include more than 22,000 species, including daisies and thistles. The first reference of dandelions being used as a medicine was written by Middle Eastern physicians in the 10th and 11th centuries. Welsh medicinals concocted as early as the 13th century made use of both the roots and leaves.

After gathering this plentiful, easily recognizable herb – preferably the younger, paler leaves – rinse them gently, pat them dry, and store them in plastic bags in a low-moisture refrigerator drawer. Blanching them by immersing them in boiling water for 20 to 30 seconds helps reduce a sometimes-present acrid taste before adding them to salads or sandwiches. Try adding dandelion greens to soups, stews and casseroles, as well as to herbal teas and coffee.

Dandelion is beneficial to digestion, be useful in treating jaundice, cirrhosis, edema due to high blood pressure, gout, eczema and acne.  Dandelion is also used to treat and prevent breast and lung tumors and premenstrual bloating.  Dandelion greens are high in vitamin A in the form of antioxidant carotenoid and vitamin C.  They also contain calcium, potassium and Dandelion root contains inulin, which lowers blood sugar in diabetics. 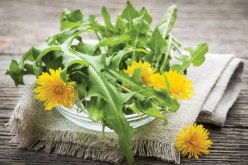 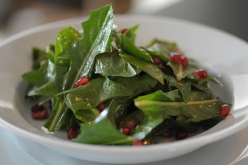 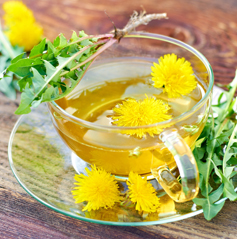