You’ve got to take your hat off to the Duke of Wellington. Not only did the doughty Brit vanquish Napoleon, twice, become prime minister and lend his name to the Wellington boot – he gave us Beef Wellington to remember him by, too.

This indulgent dish of beef, slathered with a mushroom and/or foie gras mixture, given a kick by Madeira and baked in pastry, was – depending on which old wives’ tale you’re listening to – the Duke’s favoured fuel for fighting the French, a dish created to commemorate his victory at the Battle of Waterloo or named because of its resemblance to his beloved Wellington boots.

How this beefy beauty made its journey to America is, of course, still up for grabs.  But however the dish crossed the sea, by the 1960s it had certainly been catapulted into the gastronomic stratosphere. This was partially achieved by the unlikely combination of Julia Child, who included it in her immensely influential Mastering the Art of French Cooking (1961), and presidential backing: the Kennedys and Nixon adored a bit of welly so much that a recipe was featured in 1968’s The White House Cookbook. 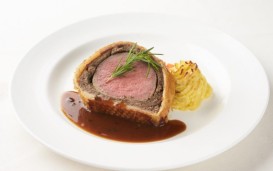