Steak tartare is a meat dish made from finely chopped or minced raw beef or horsemeat.  It is often served with onions, capers and seasonings, (typically incorporating fresh ground pepper and Worcestershire sauce), sometimes with a raw egg yolk, and often on rye bread.

The name is a shortening of the original “à la tartare” or “served with tartar sauce,” a dish popular in the 19th and early 20th centuries.

Over time, the distinction between steack à l’Americaine and its variant disappeared.  The 1938 edition of Larousse Gastronomique describes steak tartare as raw ground beef served with a raw egg yolk, without any mention of tartar sauce.

Health concerns have reduced the popularity of this meat dish in some parts of the world because of the danger of contamination by bacteria and parasites such as Toxoplasma gondii and Taenia saginata. 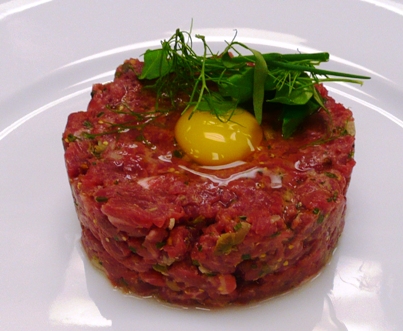 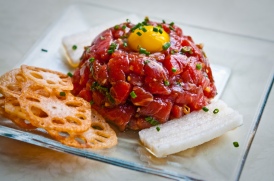 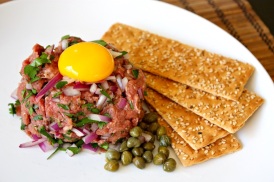