The rose hip, also known as rose haw or rose hep, is the fruit of the rose plant, that typically is red-to-orange, but ranges from dark purple to black in some species.  Rose hips begin to form after successful pollination of flowers in spring or early summer, and ripen in late summer through autumn.

Rose hips are used for herbal teas, jam, jelly, syrup, rose hip soup, beverages, pies, bread, and marmalade. They can also be eaten raw, like a berry, if care is used to avoid the hairs inside the fruit.  Native American women used rose hips for tea and as a dinner vegetable. They also used rose hips as a remedy to treat muscle cramps.

A few rose species are sometimes grown for the ornamental value of their hips, such as Rosa moyesii, which has prominent large red bottle-shaped fruits.

Rose hips are particularly high in vitamin C, one of the richest plant sources available.  However, fresh rose hips and several commercially available products revealed a wide range of L-ascorbic acid (vitamin C) content, ranging from 0.03 to 1.3%.  Rose hips of some species, especially Rosa canina (dog rose) and R. majalis, have been used as a source of vitamin C. 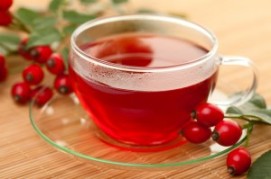 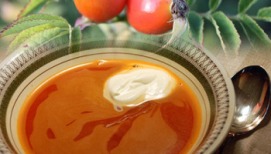