Ever wonder when you open a frozen bag of peas, carrots, or kernel corn, how come they aren’t stuck together, nor do they have frost on them?  IQF.  That’s it.  What is IQF?  Individually quick frozen.

Frozen foods have outstanding quality and nutritive value.  Indeed, some frozen vegetables, such as green peas and sweet corn, may be superior in flavour to fresh produce.  The high quality of frozen foods is mainly due to the development of a technology known as the individually quick-frozen (IQF) method.  IQF is a method that does not allow large ice crystals to form in vegetable cells.  Also, since each piece is individually frozen, particles do not cohere, and the final product is not frozen into a solid block.  In IQF, each piece is frozen individually using technique of fluidization resulting in freezing of fruit and vegetables only in 10 to 12 minutes which otherwise takes at least 3 to 4 hours or even more in the blast freezer.

In 1929, Clarence Birdseye introduced “flash freezing” to the American public.  Birdseye first became interested in food freezing during fur-trapping expeditions to Labrador in 1912 and 1916, where he saw the natives use natural freezing to preserve foods.

Frozen products do not require any added preservatives because microorganisms do not grow when the temperature of the food is below -9.5°C, which is sufficient on its own in preventing food spoilage. Long-term preservation of food may call for food storage at even lower temperatures

Frozen food packaging must maintain its integrity throughout machine filling, sealing, freezing, storage, transportation, thawing, and often cooking.  As many frozen foods are cooked in a microwave oven, manufacturers have developed packaging that can go straight from freezer to the microwave. 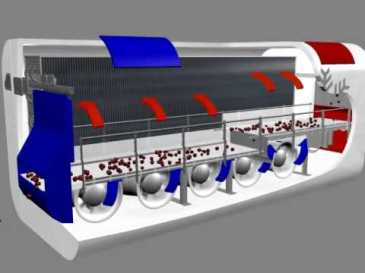