Miso’s origins can be traced to China as far back as the 4th century BC. A seasoning, called Hisio, was a paste resulting from the fermenting a mixture of soybeans, wheat, alcohol and salt. The written word, miso, first appeared around 800.

In Japan, miso was introduced the 7th century by buddhist monks. The process of making miso was furher refined and it became a necessary part of the samurai diet. With the widespread cultivation of rice, miso has become a staple food for Japanese people. Over the centuries, different types of miso were developed, often named after the province where it originated.

Well know varieties are shiro miso native to Kyoto, hatchomiso native to Aichi Prefecture and Shinshu miso produced in the Nagano Prefecture. According to Japanese mythology, miso is a gift to mankind from the gods to assure health, longevity and happiness.

Around 1960 miso was introduced in Europe by George Ohsawa. Miso was mainly an ingredient for the macrobiotic kitchen. 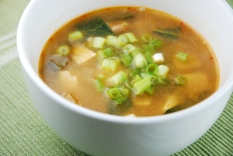