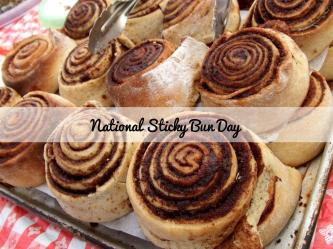 The first people to add honey and nuts to their bread were the Ancient Egyptians. Glazed pastries have been popular ever since! German settlers in Pennsylvania created our modern-day sticky buns. The pastries were originally called “Schnecken” and are still considered a Philadelphia specialty. Also, on this day:

In 1895 Carl Peter Henrik Dam was born. Dam was a Danish biochemist who discovered vitamin K in 1939.

In 1931 Alka Seltzer is introduced in the U.S. by Miles Laboratories.  It combined aspirin for relief of headaches, fevers, and body pain and bi-carbonate of soda to neutralize stomach acids and settle the stomach.

In 1985 Nathan Pritikin died. A nutritionist who believed that exercise and a low fat, high unrefined carbohydrate diet helped reverse his own heart disease. He founded the Pritikin Longevity Center in 1976.

In 1989 The USDA approved ‘Simplesse,’ a low calorie fat substitute.

In 2001 The European Commission bans all British milk, meat and livestock exports following an outbreak of foot-and-mouth disease in the U.K.