The most commonly used potato in the food service idustry is the Yukon gold Potato.  It’s very versatile (it can stand up to both dry-heat and wet-heat cooking methods.  Its waxy moist flesh and sweet flavour make it ideal for boiling, baking and frying but these potatoes will also withstand grilling, pan frying, and roasting).  The Yukon Gold Potato is not from the Yukon but rather from Ontario, Canada.

Two Canadian scientists from the University of Guelph travelled to Peru and came across this amazing potato that had a wonderful golden colour.  They wanted to re-create a potato they fell in love with from Peru.  This potato was characterized by its thin, smooth eye free skin and yellow tinged flesh. The two scientists, R. Johnston and R.G. Rowberry, created the Yukon Gold Potato…in a lab.

In 1966, the development team made their first cross between a W5289-4 (2× cross between ‘Yema de huevo’ and 2× Katahdin) and a ‘Norgleam’ potato native to North Dakota. After the 66th cross that year, true-breeding seed was produced, and the G6666 (the Yukon Gold Potato) was created.  The name…because the colour of the potato resembled the colour of gold.

The official cross was made in 1966 and the Yukon Gold was finally released into the market in 1980 by Agriculture Canada. 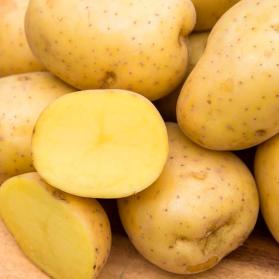