Fig Newtons were created in 1891 by the Kennedy Biscuit Works in Cambridge port, Massachusetts.  They had named many of their other cookies for nearby towns, and almost called it the “Fig Shrewsbury” before Newton won out.

Fig Newtons were one of the first commercially baked products in America.  This cookie is the 3rd most popular cookie in the U.S., over 1 billion are consumed each year. 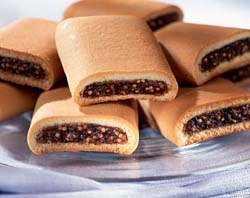