Consommé is beyond the shadow of a doubt the nectar of the soup gods.  Unbeknownst to many people and misconstrued by others, consommé is simply a carefully clarified and fortified stock, making it laborious and luxurious, not to mention a bit expensive to craft.  The end result is a clear and succulent essence, perhaps dotted with a small garnish, which lends its rich mouth-feel and potency to the guest without all of the fat.  It is pure flavor.

Chefs simply don’t make consommé on a regular basis anymore.   These soups are time consuming, uber-expensive and are in many ways misunderstood by most diners, so the effort may very well be lost on many.   As such, these factors are relegating consommé to the history books as if to say that they are not worth making anymore.

Centuries ago, peasants would slaughter their animals and work to maximize the edible yield. The head and bones were simmered or boiled in water to make soup. Once cooked the heads were taken and scrapped of all their edible parts. These parts were chopped or shredded and served hot with greens, beans or vegetables.

The liquid (broth) derived from cooking the head and bones had an interesting feature that went beyond flavor. It contained an excessive amount of protein which caused the broth to coagulate when cooled. The texture made for an interesting meal when served cold. This gave peasants a little bit of variety from a single product. 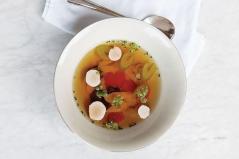