Table utensils are, above all, cultural objects, carrying with them a view of what food is and how we should conduct ourselves in relation to it. And then there are sporks.

The term “spork” is first recorded in a dictionary in 1909, though the first patent for one was only issued in 1970. Both the word and the thing are a hybrid of spoon and fork. Like a pencil with an eraser on the end, the spork is what theorists of technology call a “joined” tool: two inventions combined. In its classical form — fashioned from flimsy disposable plastic and given away at fast-food outlets — the spork has the scooping bowl of a spoon coupled with the tines of a fork. It is not to be confused with a Splayd (knife, fork and spoon in one), a knoon, a spife or a knork.

A spork is a perfect metaphor for human existence. It tries to function as both spoon and fork, and because of this dual nature, it fails miserably at both. You cannot have soup with a spork; it is far too shallow. You cannot eat meat with a spork; the prongs are too small.

Two years into his presidency, in 1995, Bill Clinton, pioneer of Third Way politics, made the spork the centerpiece of a humorous speech to the Radio and Television Correspondents’ Dinner in Washington, D.C. He claimed that the spork was “the symbol of my administration … No more false choice between the left utensil and the right utensil.” He ended the speech to rapturous applause and laughter: “This is a big, new idea — the spork! 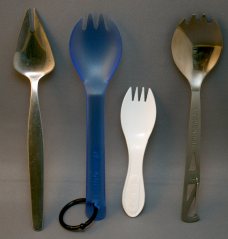