Known in ancient China as Yang Tao, the kiwi fruit earned its way in that culture not just for its flavor, but also its medicinal properties, which science has today substantiated in numerous areas.

Introduced by missionaries in New Zealand in the early 20th century, then in the US in the late 1960s, kiwi was first called “Chinese gooseberry,” although it’s doubtful that this moniker ever really stuck.

Luckily, kiwi got its new name – in honor of New Zealand’s native bird – from an enterprising food distributor, and its subsequent cultivation flew around the globe. Today, Italy, Chile, France, Japan, and the US are the highest producers of two varieties: green and gold. Kiwi is not only a scrumptious food, but is also used for its ability to tenderize meats, due to the compound actinidin.

Kiwi is a surprising little fruit, and is unlike any other. First, it’s small and light brown in color with a fuzzy skin surface. Inside, the fruit is not only lime green and studded with tiny black seeds in an oval pattern when sliced, but it’s also delicious, rather like the flavor of a strawberry. Peeled, sliced, and chilled, kiwi is an excellent addition to any fruit salad combination or by itself.

What fruit provides 273% of the daily recommended amount of vitamin C in every one-cup serving – five times that of an orange, and is a natural immune booster that staves off colds and flu? It’s kiwi, of course! Its vitamin K amount is impressive, too – best known for its role in helping blood clot, or coagulation, properly and providing an 89% daily value.  Kiwis contain good amounts of vitamin A and vitamin along with potassium to balance the body’s electrolytes and limiting hypertension and high blood pressure.  The copper in kiwi is especially good for children, supporting healthy development in infants, especially in the areas of bone growth and brain development, and also for the formation of healthy red blood cells and building immunity against disease. 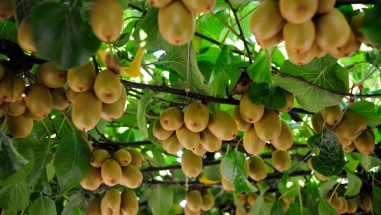 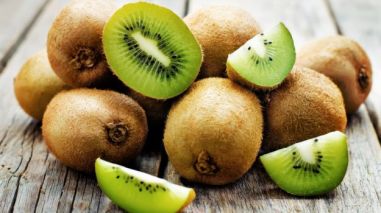 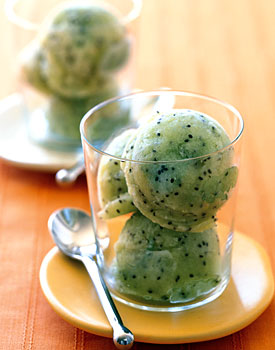