It’s the kick that fans of Japanese cuisine crave– the taste of wasabi, consumed fresh in green paste form for sushi or mixed as powder in everyday treats. A member of the Brassicaceae family (which includes cabbage, horseradish, and mustard), wasabi is also known as Japanese horseradish. Note, however, that horseradish is a different plant, although it is often used as a substitute for wasabi.

In Japan, where the earliest cultivation of the rhizome dates back to the 10th century, wasabi grows naturally in mountain streambeds. There are many cultivars in the marketplace, the main ones being W. japonica “Daruma” and “Mazuma.” Wasabi is most commonly consumed in the grated form of a green paste, as a condiment for sashimi (raw seafood) and sushi. But it is also used in many other Japanese dishes.

The flavor of wasabi is affected by how it is grated. The traditional way to grate it is with a sharkskin grater, also known as oroshi and resembling fine sandpaper. It is recommended to grate wasabi as needed, as the flavor and heat dissipate so quickly.

Wasabi has anti-inflammatory, antimicrobial, anti-platelet, and potentially anti-cancer properties. It contains potassium, calcium, and vitamin C. As it is generally used in small amounts as a condiment and therefore does not qualify as a significant nutrient source. 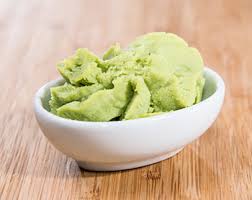