Ever wonder where the American culinary classic meatloaf really came from? Would you believe the dish can be traced back for centuries?  The meatloaf has European origins; meatloaf of minced meat was mentioned in the famous Roman cookery collection Apicius as early as the 5th century.

Meatloaf is a traditional German, Scandinavian and Belgian dish, and it is a cousin to the Dutch meatball. American meatloaf has its origins in scrapple, a mixture of ground pork and cornmeal served by German-Americans in Pennsylvania since Colonial times.  However, meatloaf in the contemporary American sense did not appear in cookbooks until the late 19th century.

Patties or “loaves” of minced meat, mixed with a variety of ingredients, are part of many culinary histories. Germans hid boiled eggs inside meatloaf, the Romans enjoyed theirs made with wine-soaked bread, spices, and pine nuts, Medieval Europe served it mixed with fruit, nuts and seasonings.  Sometimes it was served hot, or wrapped in ham, or served cold with sauces, or was found jiggling in layers of gelatin.  From the beginning, meatloaf showed us how much potential we have for the re-invention of food.

The Great Depression was hard on the majority of Americans, with millions out of work, the stock market crash, and the Dust Bowl. With meatloaf’s ability to stretch cheap meat into even more meals by the addition of cheap oats, breadcrumbs, and other starches, it’s no wonder this filling dish gained even more appreciation in the hearts of Americans during this time frame. 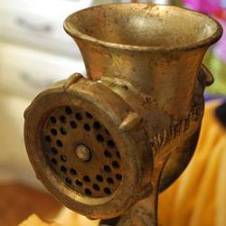