“Twas the Night before Christmas”, also known as “A Visit from St Nicholas” was written in 1822 by Clement Clarke Moore and was originally written for his family (supposedly on Christmas Eve, but this may have just been part of a marketing strategy from the publishers). It was first published in the Troy (New York) Sentinel on 23rd December 1823.

This poem historically appears to be the first mention of St. Nicholas actually having a sleigh and reindeer. 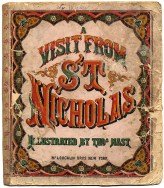