Gnocchi are various thick, soft dough dumplings that may be made from semolina, ordinary wheat flour, egg, cheese, potato, breadcrumbs, cornmeal, or similar ingredients, with or without flavourings of herbs, vegetables, cocoa, or prunes.  The dough for gnocchi is most often rolled out, then cut into small pieces of about the size of a cork.  They are then pressed with a fork or a cheese grater to make ridges which hold sauce.  Alternatively, they are simply cut into little lumps.  Gnocchi is usually eaten as a replacement for pasta as a first course, but it can also be served as a contorno (side dish) to some main courses.

The word gnocchi may be derived from the Italian word nocchio, meaning a knot in wood, or from nocca (meaning knuckle).  It has been a traditional type of Italian pasta of (probable) Middle Eastern origin since Roman times.  It was introduced by the Roman legions during the expansion of the empire into the countries of the European continent.  In the past 2,000 years, each country has developed its own specific type of small dumpling, with the ancient gnocchi as their common ancestor.  In Roman times, gnocchi were made from a semolina porridge-like dough mixed with eggs, and are still found in similar forms today, particularly the oven-baked gnocchi alla romana, and Sardinia’s malloreddus which do not contain eggs.

The use of potato is a relatively recent innovation, occurring after the introduction of the potato to Europe in the 16th century. 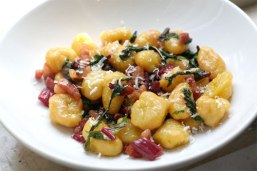