A samosa is a fried or baked dish with a savoury filling, such as spiced potatoes, onions, peas, lentils, macaroni, noodles or minced meat (lamb, beef, chicken).  Pine nuts can also be added.  Its size and consistency may vary, but typically it is distinctly triangular or tetrahedral in shape.  Indian samosas are usually vegetarian, and often accompanied by a mint chutney.

The samosa is claimed to have originated in the Middle East (where it is known as sambosa) prior to the 10th century.  Abolfazl Beyhaqi (995-1077), an Iranian historian, mentioned it in his history, Tarikh-e Beyhaghi.  Samosas were introduced to the Indian subcontinent in the 13th or 14th century by traders from Central Asia.

The current day samosas are small, crispy, flaky pastries that are usually deep-fried. They are stuffed with an assortment of fillings ranging from minced meat with herbs and spices to vegetables such as cauliflower and potatoes. In Bengal one finds samosas filled with sweetened reduced milk that go straight from the frying pan to a syrup wash. But whatever the filling, samosas are a treasured snack—the perfect companion to a cup of chai. 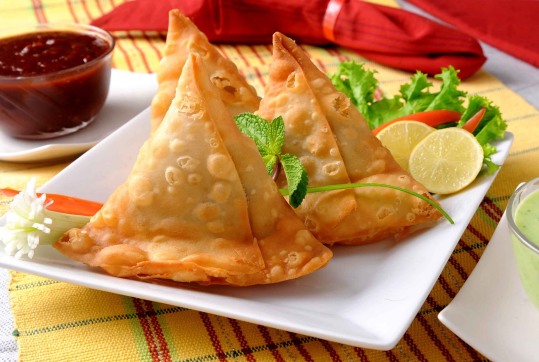 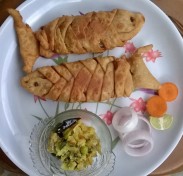