Poke, a classic Hawaiian pupu, or snack, is a centuries-old tradition—possibly dating as far back as the arrival of the first Hawaiians in the island chain. Certainly, the dish existed before Captain Cook’s arrival.

Back then, poke was a simple meal. Scraps of reef fish and crisp limu, or seaweed, were mixed with crushed kukui nuts and sea salt. Historians squabble over whether or not the meal was called poke then or if the name only took hold in the 1960s. One thing is certain: poke, Hawaiian for “to cut crosswise into pieces,” is a quintessentially Hawaiian dish.

As other cultures came to the islands, poke changed. Easier access to deep-water fish saw ahi replace reef fish as the most popular poke choice. The Japanese added shoyu to their poke recipes. With time, sesame oil became a popular ingredient. Tofu and octopus became popular alternatives to ahi.

Poke holds a fond place in the hearts of locals. The dish is a staple of luaus, family get-togethers, tailgate parties, and any other get together filled with friends, family, and “Aloha.” Poke is to the islands what nachos are to the mainland—a quick, filling snack food, seen more as comfort food than a full meal. 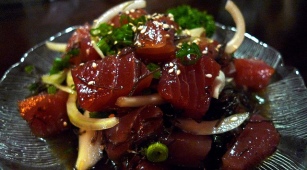 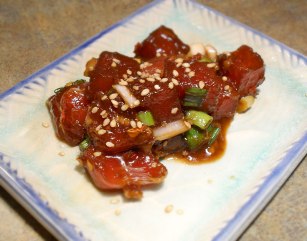