Sea urchins or urchins, archaically called sea hedgehogs, are small, spiny, globular animals that, with their close kin, such as sand dollars, constitute the class Echinoidea of the echinoderm phylum.  About 950 species of echinoids inhabit all oceans from the intertidal to 5,000 metres (16,000 ft; 2,700 fathoms) deep.  The shell, or “test”, of sea urchins is round and spiny, typically from 3 to 10 cm (1.2 to 3.9 in) across.

In cuisines around the Mediterranean is often eaten raw, or with lemon, and known as ricci on Italian menus where it is sometimes used in pasta sauces.  It can also flavour omelettes, scrambled eggs, fish soup, mayonnaise, béchamel sauce for tartlets, the boullie for a soufflé, or Hollandaise sauce to make a fish sauce.  In Chilean cuisine, it is served raw with lemon, onions, and olive oil.  Sea urchins (called uutuk in Alutiiq) are commonly eaten by the Alaska Native population around Kodiak Island.  It is commonly exported, mostly to Japan.  In the West Indies, slate pencil urchins are eaten.  In New Zealand, Evechinus chloroticus, known as kina in Maori, is a delicacy traditionally eaten raw, though New Zealand fishermen would like to export them to Japan, their quality is too variable.  In Japan, sea urchin is known as uni , and its roe can retail for as much as A$450/kg; it is served raw as sashimi or in sushi, with soy sauce and wasabi.  Japan imports large quantities from the United States, South Korea, and other producers.  Japanese demand for sea urchin corals has raised concerns about over-fishing. 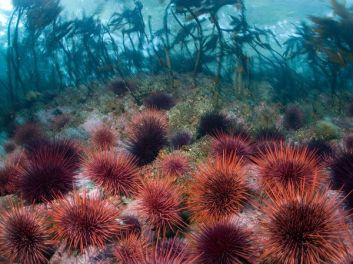