Ghee is a class of clarified butter that originated in ancient India and is commonly used in South Asian, Iranian and Arabic cuisines, traditional medicine, and religious rituals.  Ghee is prepared by simmering butter, which is churned from cream, skimming any impurities from the surface, and then pouring and retaining the clear, still liquid fat, while discarding the solid residue that settled on the bottom.  Spices can be added for flavor.

Ghee is common in Indian and Pakistani cuisine, including traditional rice preparations (such as biryani).  In Rajasthan, ghee often accompanies baati.  All over north India, ghee tops roti.  In Bengal (both West Bengal and Bangladesh) and Gujarat, khichdi is a traditional evening meal of rice with lentils, cooked in curry made from yogurt, cumin seeds, curry leaves, cornflour, turmeric, garlic, salt and ghee.  It is also an ingredient in kadhi and Indian sweets, such as Mysore pak and varieties of halva and laddu.  Pakistani and Punjabi restaurants typically incorporate large amounts of ghee, sometimes brushing naan and roti with it, either during preparation or just before serving.  Ethiopians believe that the addition of spices and herbs purifies the butter. 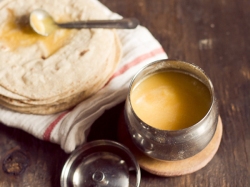