Lingon berries grow in the wild in Sweden on small bushes in woodlands and on moorlands.  They ripen in August and September and are picked with a scrabbler, a wide fork-like tool, which can strip a bush very quickly.  Washington and Oregon now lead the world in lingonberry production.

Although the berries might look attractive on bushes they are not good to eat in their raw state as they are quite bitter. They have shiny, rather hard skins when fresh, but they are transformed with a little sugar. Then they become quite sophisticated, as the combination of their natural bitterness with the sweetness from the sugar goes well with game, meat, fish and with several desserts.

Lingon berries are full of powerful antioxidants which are said to neutralise the sun’s radiation and help prevent skin damage.  Eating lingon berries is said to ward off certain cancers and to help prevent some types of infection.  Thus, Swedish children were traditionally encouraged to have lingon berry jam with porridge for breakfast and to have a portion of lingon berries with many main courses. 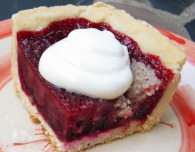