Kimchi is a uniquely pungent mixture of fermented vegetables and its variations amounted to roughly 80 kinds of dishes during the Choson period.  For spring, summer and fall consumption, kimchi was cured in a small quantity, but for the winter months, large quantities were made so that it could be eaten over three or four months.  The kimchi-curing for the winter season was called, “kimjang” and was usually done in late November.

In ancient times, kimchi was made of greens picked and salt or a salt and alcohol mixture.  By the end of Unified Shillan and the beginning of Koryo, sliced-radish kimchi pickled in brine became popular.  Soon thereafter chili was introduced to Korea around 1500 and it was added to make kimchi as well.  During the late Choson era, powdered chili, together with chotkal (fish or shellfish paste), became the favored ingredients in kimchi.  In the southern regions, the chotkal was made of anchovies, while in the northern regions, croaker and shrimp chotkal were more popular.  The climatic differences of each region affected the taste of kimchi as well.  In warm places, chotkal and chili powder were used in abundance so that kimchi could be prevented from going bad.  On the other hand, kimchi made in colder areas was less salty and pungent.  Today, many firms are mass-producing kimchi.

A study of kimchi history reveals that people were enjoying kimchi’s unique goodness more than 4,000 years ago.  In about 2030 B.C. the inhabitants of northern India brought seeds of this vegetable to Mongolia, and the preservation of greens with other vegetables soon became common as cultured raw vegetables.  Kimchi is the most versatile food.  In Japan and Korea, it is served as a side dish.  An impressive range of all kinds of kimchi is becoming very popular in America, Hawaii, Asia, the Middle East, Europe, and way down under in Australia.  Indeed, it is found and enjoyed almost everywhere nowadays.  Kimchi is never fickle where flavor is concerned.  Its tantalizing taste attracts particular eaters.

In Japan, Korea, and both northwest and southeast Asia, each person munches an average of ten to fifteen kilograms of kimchi a year.  In South Korea alone, that is about four hundred tons per year or more of kimchi consumed than any other vegetable.

Kimchi satisfies the appetite and is also a perfect relish which enhances the taste of other food: it has 42 mg of vitamin C per 10g, which is more than half of the US government’s recommended daily allowance.  Kimchi is high in fiber, a food component usually too low in the average American diet.  Fiber also add the bulk necessary for proper digestion.  Kimchi is rich in minerals and vitamins and is an essential source of thiamine (B1), riboflavin (B2), calcium and iron, all of which are essential components for human health.  Kimchi is surprisingly low in calories for a food of such nutritional value, with only 33 calories per cup (less than 15 cal/100g). Hence, it provides a great way to lose weight or just keep it off.  Kimchi is versatile, and its low cost and east of serving are among the reasons for its popularity. 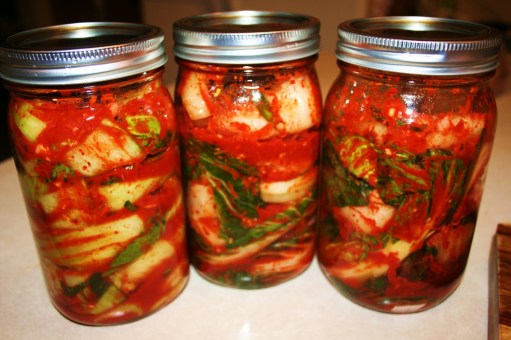 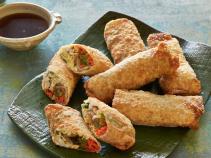 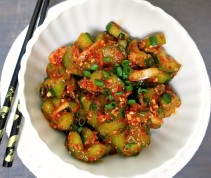