The Greek ambassador of Seleucus mentioned that rice with pulses is very popular among people of South Asia.  The Moroccan traveller, Ibn Battuta mentions kishri as a dish in India composed of rice and mung beans, during his stay circa 1350.  Khichdi is described in the writings of Afanasiy Nikitin, a Russian adventurer who travelled to the South Asia in the 15th century.  Khichdi was very popular with the Mughals, especially Jahangir. Ain-i-Akbari, a 16th-century document, written by Mughal Emperor, Akbar’s vizier, Abu’l-Fazl ibn Mubarak, mentions the recipe for khichdi, which gives seven variations.

Khichdi is a very popular dish across Pakistan and North India.  The dish is widely prepared in many Indian states like Gujarat, Bengal, Bihar, Jharkhand, Uttar Pradesh, Odisha, and Maharashtra.  Vegetables such as cauliflower, potato, and green peas are commonly added.  A popular variant in coastal Maharashtra is made with prawns.  In other regions, the khichdi is commonly served with a side of kadhi, and often accompanied with papadum. 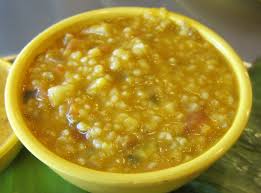