The large tapered Yuca roots or Cassava are similar in size and shape to a sweet potato and can be anywhere from one to several pounds in size and can grow up to 4 feet below the ground.  The starchy flesh of the Yuca root is a light white or cream color with a grainy texture similar to potatoes.  The meaty flesh is mild, sweet flavor that has a somewhat nutty taste.

Yuca is a highly drought-resistant crop, and is a mainstay in the diets of millions of people living in tropical and sub-tropical regions around the globe.  It is a good crop for regions where rain is unpredictable and potentially scarce.  Brazil, Nigeria and Thailand are the predominant producers of Yuca in the world.  Native to South America and parts of the Caribbean, the name “Tapioca” comes from the Tupi word tipi’oka.  Tupi was the language of the natives living in Brazil when the Portuguese explorers first came to the Americas.  The word tipi’oka refers to the process of making starch from the tuber.  The root is still referred to as Tapioca in northeast Brazil, whereas Madioca and Aipim are more common names for Yuca in northern and central Brazil.  In the United States, Yuca is commonly known as Cassava, most likely to distinguish it from the desert yucca plant.

Yuca root is the third largest source of carbohydrates in the world and is considered a main food staple for millions.  The starchy tuber is high in calcium, dietary fiber, potassium, and vitamins B6 and C.  Yuca has relatively no protein, but does contain high levels of essential fatty acids and twice the calories of potatoes.  The young leaves of the Yuca plant are rich in vitamin K and have more protein and nutrients than the root.  Yuca root is gluten-free and the starch made from it is easily digested by anyone with dietary sensitivities.  Yuca has been found to contain goitrogens, which are substances found in other cruciferous vegetables like cabbage that can block the intake of iodine by the thyroid.  The presence of the goitrogens can increase the levels of iodine deficiency in areas where the Yuca root is the primary source of energy. 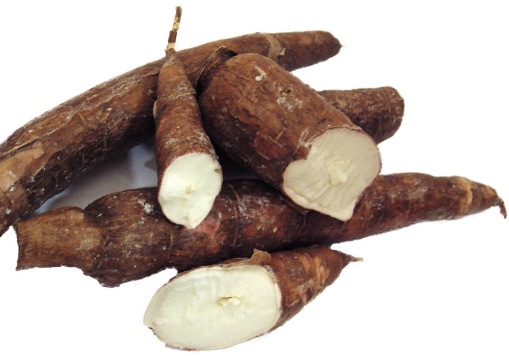