A chicken lollipop is a way of preparing a chicken wing so all the meat from one of the segments is in a ball at one end of the wing bone.  The area of the bone from which the chicken was scraped away sticks out from the ball of meat like a lollipop stick and can be used as a handle for eating the dish, or it can be simply a decorative element for the final plating.  The dish is a Chinese and Indian dish, and can be eaten as a snack, a side dish or as a main course.  The chicken lollipop can be marinated, breaded and deep fried or cooked without any additional flavorings.  It is traditionally served with some type of dipping sauce, such as a soy sauce with garlic and ginger, or a honey mustard mixture, or even an Indian curry using garam masala.

The preparation of the chicken lollipop is what separates it from other chicken wing dishes. The chicken wing is first cut at each joint, creating three pieces of meat.  The wing tip, which has almost no meat on it, can be discarded.  The remaining two segments can each be turned into a chicken lollipop, although the center piece with two bones takes more time and skill.  The meat is carefully scraped from the bone with a knife, pushing it down toward the end of the wing segment.  With some pressure, the meat will gather at the bottom and leave the top half of the wing bone bare and exposed.  For the center segment of the wing, the smaller bone needs to be cut out before pushing the meat downward.  Once the meat for this section is at the bottom of the bone, part of it is flipped inside out to form a dense ball.

Some cooks completely scrape the exposed wing bone of the chicken lollipop, giving it a much cleaner and more professional appearance.  Other times, the remaining pieces of meat, tendon and sinew can be left on the bone to give it a more rustic appearance.  If being grilled, broiled or cooked on high heat, the bone can be wrapped in aluminum foil to stop it from burning. 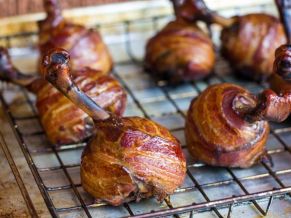